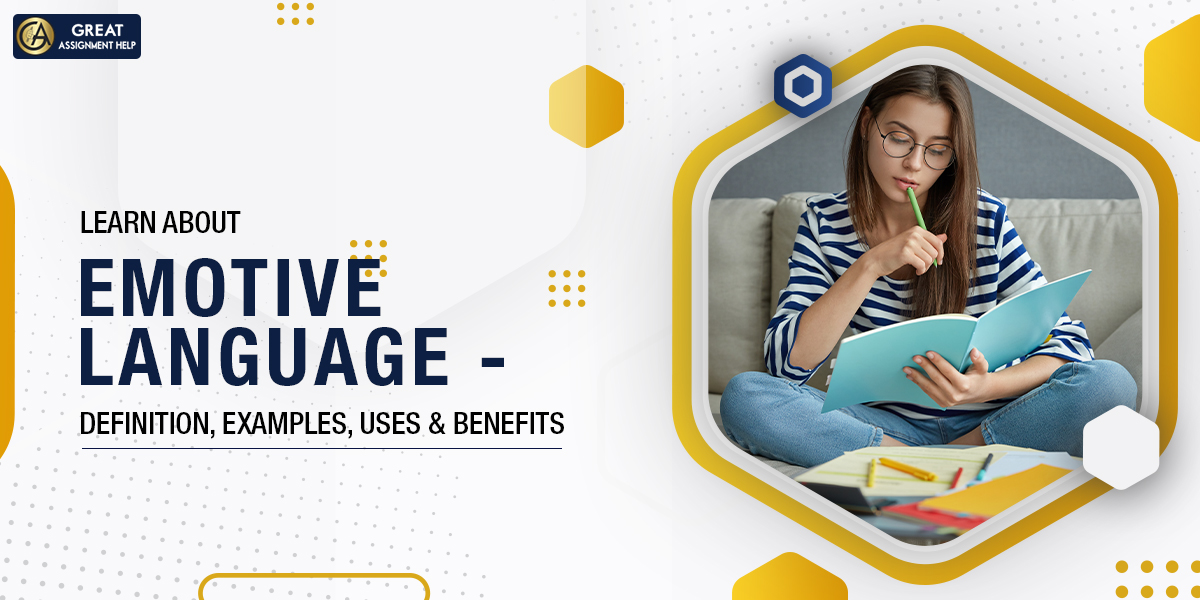 In our life, emotions play a huge role. Especially when it comes to verbal or written communication, the appropriate use of emotive language adds value to the content and persuades the audience.

What is emotive language?

Emotive language is a kind of language that transmits emotions through words or sentences. Mainly, it helps to deliver opinions, ideas, and thoughts persuasively using emotions. If you want to learn more about emotive language and its usage, then continue reading this blog post.

Here, we have shared what emotive language means, its significance, and its utilization with real-life examples. Without wasting your time, quickly dive in and gain knowledge of how to use emotive language in your writing effectively.

The aim of emotive language is to create an effect on the people. Be it writing an essay or narrating a story, emotive language utilizes emotions to connect the readers or listeners with the speaker or writer. When information is conveyed in an emotional way, it will effortlessly reach the subconscious mind of the listeners or readers and will also be easy for them to memorize the content delivered. 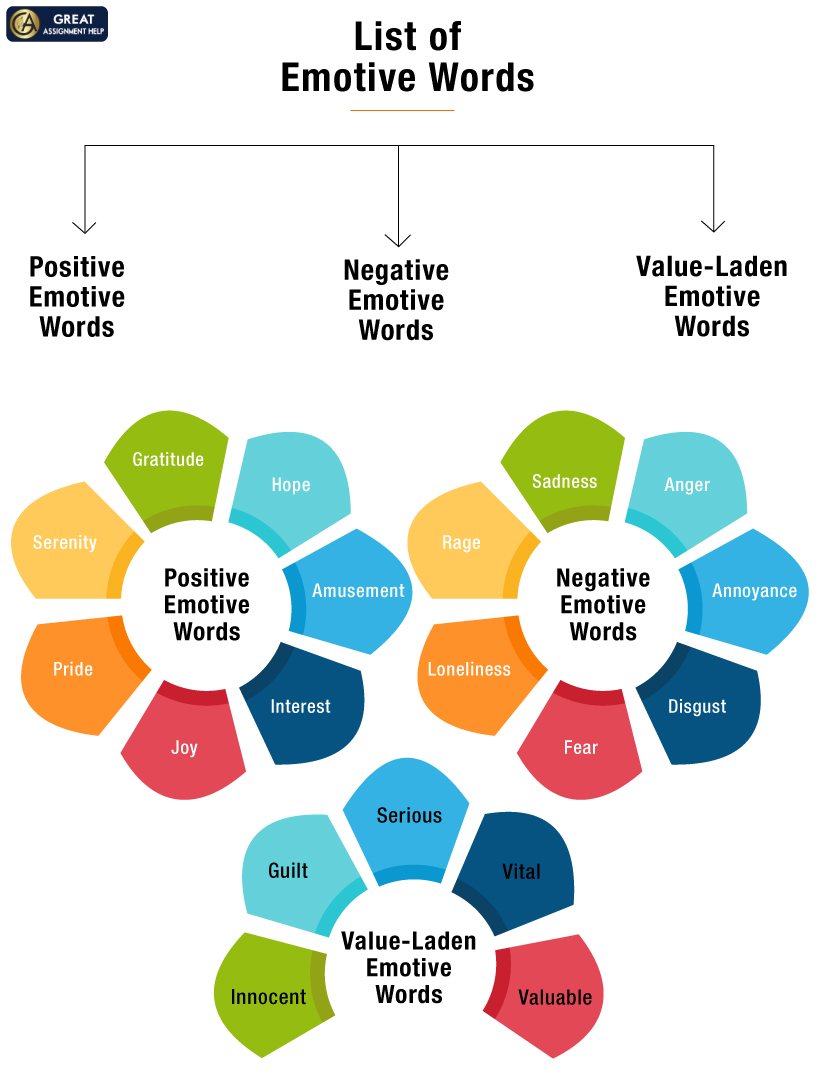 Emotive language is the greatest language type that associates the readers along with the writers. It is particularly characterized by the variety of words or phrases that are utilized to communicate an emotion. The words can be emotive adjectives, adverbs, verbs, and abstract nouns. Also, it can be negative or positive emotive.

Listed below are some powerful emotive words that you can use to boost your writing.

Value-laden words are words that express positive or negative opinions or biases toward the subject. It generally reflects the bias of the author and is sometimes referred to as loaded words. Some popular value-laden emotive words are

Sentence 1: Drop that plastic can in the recycle bin

Sentence 2: Plastic recycling saves the planet and so always put the plastic wastes in the recycle bin.

Listed below are a few more examples of emotive language.

Non-Emotive: The bus hit the biker.

In this example, the accident is not exaggerated and hence it will not evoke any emotions in the readers. But when the same event is presented elaborately with emotive words like viciously crushed, a sympathetic emotion is created.

Non-Emotive: He was badly injured in the accident.

Emotive: He was left with horrific injuries in the accident.

Non-Emotive: The passenger was murdered on the train.

Emotive: The innocent passenger was brutally murdered on the train.

In the above example, the non-emotive sentence is less descriptive and hence no emotions are conveyed. But in the emotive sentence, the words, ‘innocent and brutally murdered’ clearly portrays the events in detail and also trigger an emotion.

Non-Emotive: The bride entered the marriage hall in good attire.

Here, in this example, the beauty of the bride was not exaggerated and hence it fails to create an emotion. But, in the emotive sentence, the words, ‘adorable and gorgeous’ emphasize the girl’s beauty and attire, and thus generate positive emotions.

Non-Emotive: The whales were hunted.

Emotive: The whales were brutally slaughtered.

In the above-mentioned non-emotive sentence, the act of hunting didn’t evoke any emotions. But when the same is explained using the words ‘brutally slaughtered’ a sensitive and intense meaning is delivered to the readers about the cruel criminal activity.

So, by now, you would have gained an idea of how to use emotive words in your writing. But do you know where the emotive languages can be used? The uses of emotive language in our daily life are many.

For marketing and promotions, emotive language is used in advertising materials to attract the target audience by triggering their emotions. Other than that, during the creation of the artworks like films, drama, books, poems, and novels that revolve around the portrayal of life, emotive language is used extensively to narrate a story emotionally and to transfer the emotion of characters to the readers.

Using emotive language in artworks is one of the smartest tricks to attract the audience. Not just artworks, the emotive language can also be used when writing personal diaries and autobiographies that involve a lot of genuine sentiments.

Emotive language is used widely in our everyday life because of the numerous benefits it provides when implemented. Listed below are a few benefits of an emotive language that you can gain when you use it while speaking or writing

The Effects of Emotive Language

You can use emotive language to persuade the audience and can also consider it as a manipulative technique. Moreover, sometimes, it also induces the crowd to question back write or speaker. In such a case, things will completely turn against you, and you may end up making a mistake. Hence, avoid overusing emotive language.

Implementation of Emotive Language in Literature

Writers usually write literature for a purpose. But mostly it is crafted to transfer their thoughts and ideas to the readers. When writing something for strangers, in order to engage the readers, it is important to convey the thoughts in a way that is relatable to them. Hence, that is the reason why the authors frequently use language techniques in the literature.

Here, let us have a look at how emotive language is used in literature.

This is a short excerpt from the Civil Rights Speech of Martin Luther King, Jr in 1963.

The name “Martin Luther King” is enough to enter into the contemporary world. The majority of us know about the world where the great Martin Luther King lived and the value he followed in life. So, when reading this sentence from his speech, you can easily connect with his background.

Now, let us evaluate the excerpt.

The incomparable Martin Luther King, Jr. with his effective rhetoric obtains emotional responses from his audience. One strong persuasive technique used in his speech is emotive language.

Here, we will show you how with a simple excerpt from his speech.

Let us have a look at another example of emotive language in literature.

Poetry is one of the popular modes of expressing feelings or emotions through descriptive words. When speaking about poetry, we can’t ignore the literature works of William Shakespeare.

In particular, Shakespeare in his Sonnet 18 has used emotive language effectively. Let us have an analysis of an excerpt from Shakespeare’s Sonnet 18.

Shall I compare thee to a summer’s day?
Thou art more lovely and more temperate:
…
And every fair from fair sometime declines,
By chance or nature’s changing course untrimm’d;
But thy eternal summer shall not fade,
Nor lose possession of that fair thou ow’st;

Here, to compare his love interest to a summer day that will never fade, Shakespeare has used emotive language. Specifically, in the second line of the sonnet, he has used emotive words like ‘lovely and temperate’ to describe a person and raised an argument that the person is far better than the summer’s best day you could experience.

If both the connotation and emotive language are used effectively in the right way, then influencing the readers will not be tough. In a text, both techniques can be spotted easily, but exceptions are there. At times, it might be complex for you to understand the meaning of the words. Hence, in order to analyze the use of connotation and emotive language, you must have prior knowledge about those techniques.

To help you with the learning, here we have explained what a connotation is and how to analyze emotive language and connotation.

To improve your writing, along with the understanding of emotive language, you should also know the concept of connotation. So, what is a connotation?

Connotation is defined as a method of showing an additional meaning of a word or a set of words beyond the regular literary interpretation. In simple words, the connotation is identified as an emotion or an idea carried by a word or a phrase in addition to its literal meaning. By using connotations, the writers or speakers refer to “what is advised or implied”.

In a language, the usage of words plays a major role. We have limitless words with their own meanings and associations. Hence, we need to choose the words carefully as they are the only medium to persuade the audience and to evoke a particular emotion or reaction.

Let us make learning easier. Discussed below are a few examples of connotations.

Color association is one of the simplest ways to understand the concept of connotation. In general, each color is connected with some emotions.

Likewise, each color has a unique interpretation.

But, at times, the writers or speakers purposely use connotations to point out a specific association.

Use of Connotation in Literature

A connotation is a popular language feature, many literary writers use in their writing. Now, let us have a closer look at the speech of Elizabeth I.

‘I know I have the body but of a weak and feeble woman, but I have the heart and stomach of a king …’

From her choice of words, the listeners can easily understand the core of the speech. She clearly explains herself as a woman who lacks the physical attributes of a man but possesses inner strength, and courage. In her speech, she compares herself to a King and represents her as a woman in the men’s world who can stand independently for her people.

Analysis of Emotive Language and Connotation

Here is a detailed explanation of how to investigate connotations and emotive language.

At first, you should deal with the intention of the speaker or writer. So, analyze and find out the emotional reaction the writers or speakers want from the listeners or readers. Say, for example, it can be happiness or rage, pride or pity, etc.

The reaction of the audience and purpose

Secondly, explore and find how the emotional reaction of the audience relates to the overall purpose of the writers.

It is another aspect to focus on while analyzing the language techniques. If a writer begins with angry phrases, might this enrage the intended audience? Whether it is making a “them and us” scene that the readers or listener might recognize or not. It is necessary to consider emotive language in the context of the purpose that you want to present in your writing.

When analyzing the emotive language and connotations, ask yourself the following three questions.

During the investigation, always make sure to keep in mind factors like political interests, socioeconomic factors, religious beliefs, age, and gender impact the effects that emotive language and connotations can have on the readers. Remember, each person has their own perspectives and that is the reason why different meanings are perceived from the same text.

Finally, we have reached the conclusion. Till now, we saw the complete details about the concepts of emotive language and connotations. We hope, with the understanding you have gained from the explanations and examples shared in this blog post, you will come up with extraordinary writing work. Writing content by using innovative language techniques is not an easy task to deal with. After you have completed writing your draft, without fail proofread and edit the entire work to avoid unnecessary errors.

In case, you are not sure how to use emotive language in your writing, reach out to us for online assignment writing help. We have a team of academic writers who are language experts to assist you in delivering high-quality content on time as per your requirements at an affordable rate. Without any hesitation, quickly avail of our academic writing service and enjoy the necessary academic benefits.

Best Conclusion Starters That Will Help You Connect With the Audience

What is a Research Proposal? You Need to Know These!